The Century Foundation’s Heartland Cities Tour has a Huge Success in Cleveland! Next, On to Chicago!

The Century Foundation Manufacturing a Better Paying Ohio Summit was held in Cleveland on March 12. The event was a huge success with an overflow sold-out crowd and keynote address from Senator Sherrod Brown. Heartland Capital Strategies (HCS) was a co-sponsor of the event, and Ted Chandler, COO of the AFL-CIO Housing Investment Trust (HIT) and a founding board member of Heartland, gave the closing address. As noted in the Cleveland Plain Dealer, "Manufacturing experts, advoc
Andrew Stettner &amp; Michael Shields

To help manufacturing in Ohio, think beyond tariffs

CLEVELAND -- This week, President Donald Trump imposed tariffs on imported steel and aluminum in an effort to help U.S. manufacturers -- companies like ArcelorMittal in Cleveland -- that have long been hurt by deindustrialization and offshoring. The announcement has sparked a firestorm of debate, dividing workers, advocates, and economic experts across the political aisle, and even manufacturers themselves. What this debate is really about, though, is not tariffs, but jobs, a
Tom Croft, Managing Director

So Long, Ron! A Farewell to Ron Blackwell, “Common Sense” Economist for the Labor Movement

“No doubt this attack on democracy reflected the rise of a wealthy minority…which called itself the Oligarchical Party, and denounced democracy as an incompetent sham.” This passage, from back in the day, might have been a tongue-in-cheek quote from Mark Twain about the raw, wild west violence of the robber barons of the Gilded Age, or maybe by Thorsten Veblen, the author who wrote The Theory of the Leisure Class and coined the term “conspicuous consumption,” about the rigge
Committee on Workers&#39; Capital

Across the globe, governments see investment in infrastructure as a major priority, not least as part of the shift to a low-carbon economy. At the same time, public finance levels have deteriorated as debt to GDP ratios have increased. In these circumstances, one of the best options for public financing of public infrastructure remains borrowings and loans, either by way of regular bonds or specially created infrastructure bonds. The latter are considered attractive because t 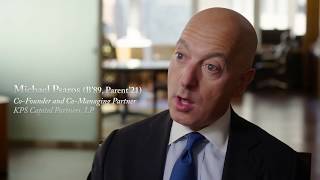 Michael G. Psaros, treasurer of the Greek Orthodox Archdiocese of North America, and co-founder of KPS Capital Partners, LP was honored March 1 at the 18th Annual Wall Street Alliance Scholarship Dinner. Each year, the dinner brings together the Georgetown University business community to honor colleagues that have made a significant mark professionally and in service to their community. The dinner also raises money to provide scholarship assistance to undergraduates of the u
Economic Policy Institute

Ron Blackwell, a friend to EPI since its early days, died on February 25. Ron had a long career in the labor movement, starting with the Amalgamated Clothing and Textile Workers Union in New York, moving to the AFL-CIO in Washington, D.C. until he retired in 2012. Raised in Alabama, he was a steadfast defender of the rights of working people and a life-long enemy of economic injustice in its many forms. He pioneered in the design and management of campaigns to use the financi
{"items":["5f62845bd4f5b40017027b7b","5f62845bd4f5b40017027b7a","5f628459635f7a00177d5832","5f62845bd4f5b40017027b79","5f628459635f7a00177d5830","5f628459635f7a00177d5831"],"styles":{"galleryType":"Columns","groupSize":1,"showArrows":true,"cubeImages":true,"cubeType":"fill","cubeRatio":1.3333333333333333,"isVertical":true,"gallerySize":30,"collageAmount":0,"collageDensity":0,"groupTypes":"1","oneRow":false,"imageMargin":32,"galleryMargin":0,"scatter":0,"rotatingScatter":"","chooseBestGroup":true,"smartCrop":false,"hasThumbnails":false,"enableScroll":true,"isGrid":true,"isSlider":false,"isColumns":false,"isSlideshow":false,"cropOnlyFill":false,"fixedColumns":1,"enableInfiniteScroll":true,"isRTL":false,"minItemSize":50,"rotatingGroupTypes":"","rotatingCropRatios":"","columnWidths":"","gallerySliderImageRatio":1.7777777777777777,"numberOfImagesPerRow":1,"numberOfImagesPerCol":1,"groupsPerStrip":0,"borderRadius":0,"boxShadow":0,"gridStyle":1,"mobilePanorama":false,"placeGroupsLtr":true,"viewMode":"preview","thumbnailSpacings":4,"galleryThumbnailsAlignment":"bottom","isMasonry":false,"isAutoSlideshow":false,"slideshowLoop":false,"autoSlideshowInterval":4,"bottomInfoHeight":0,"titlePlacement":"SHOW_ON_THE_RIGHT","galleryTextAlign":"center","scrollSnap":false,"itemClick":"nothing","fullscreen":true,"videoPlay":"hover","scrollAnimation":"NO_EFFECT","slideAnimation":"SCROLL","scrollDirection":0,"scrollDuration":400,"overlayAnimation":"FADE_IN","arrowsPosition":0,"arrowsSize":23,"watermarkOpacity":40,"watermarkSize":40,"useWatermark":true,"watermarkDock":{"top":"auto","left":"auto","right":0,"bottom":0,"transform":"translate3d(0,0,0)"},"loadMoreAmount":"all","defaultShowInfoExpand":1,"allowLinkExpand":true,"expandInfoPosition":0,"allowFullscreenExpand":true,"fullscreenLoop":false,"galleryAlignExpand":"left","addToCartBorderWidth":1,"addToCartButtonText":"","slideshowInfoSize":200,"playButtonForAutoSlideShow":false,"allowSlideshowCounter":false,"hoveringBehaviour":"NEVER_SHOW","thumbnailSize":120,"magicLayoutSeed":1,"imageHoverAnimation":"NO_EFFECT","imagePlacementAnimation":"NO_EFFECT","calculateTextBoxWidthMode":"PERCENT","textBoxHeight":0,"textBoxWidth":200,"textBoxWidthPercent":50,"textImageSpace":10,"textBoxBorderRadius":0,"textBoxBorderWidth":0,"loadMoreButtonText":"","loadMoreButtonBorderWidth":1,"loadMoreButtonBorderRadius":0,"imageInfoType":"ATTACHED_BACKGROUND","itemBorderWidth":3,"itemBorderRadius":0,"itemEnableShadow":false,"itemShadowBlur":20,"itemShadowDirection":135,"itemShadowSize":10,"imageLoadingMode":"BLUR","expandAnimation":"NO_EFFECT","imageQuality":90,"usmToggle":false,"usm_a":0,"usm_r":0,"usm_t":0,"videoSound":false,"videoSpeed":"1","videoLoop":true,"jsonStyleParams":"","gallerySizeType":"px","gallerySizePx":742,"allowTitle":true,"allowContextMenu":true,"textsHorizontalPadding":-30,"itemBorderColor":{"themeName":"color_15","value":"rgba(25,30,35,1)"},"showVideoPlayButton":true,"galleryLayout":2,"targetItemSize":742,"selectedLayout":"2|bottom|1|fill|true|0|true","layoutsVersion":2,"selectedLayoutV2":2,"isSlideshowFont":false,"externalInfoHeight":0,"externalInfoWidth":0.5},"container":{"width":742,"galleryWidth":774,"galleryHeight":0,"scrollBase":0,"height":null}}